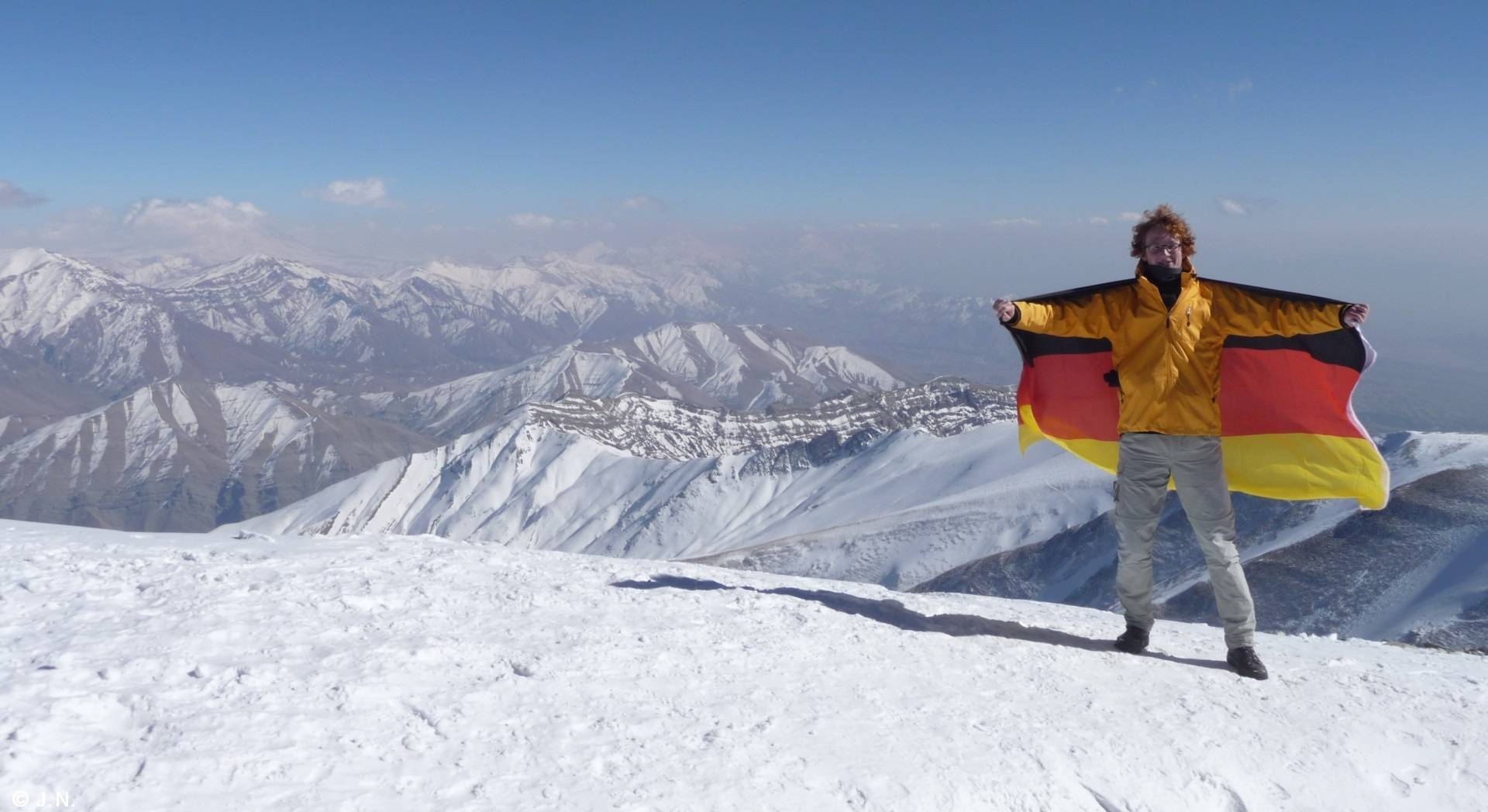 Roman and I got up at five in the morning to go hiking again. This time we decided to do a “real” tour. We were about to conquer Tochal (3962m/13000 ft). Of course we could have used the cabin to the top – or close to the top, but where would have been the challenge and fun then?
At six we started from the dorm in Velenjak (~1700m/5555ft) and began the actual tour from the first cabin station (1904m/6250ft) at 6.30. That’s why we could witness the sunset over Tehran. Fortunately a strong wind was blowing over the town, so we had a clear view for the first time since our arrival in Tehran.
Even at that early hour surprisingly many people were around. They were mostly over 40 years old and some even came back from their tour.
Three hours later we arrived at the third cabin station, which seems to be the destination of most hikers. It lays at2500m (8200ft) altitude and was used by us to take a breakfast break.
The hiking community in Iran is sworn in, so we were greeted friendly and offered tea, scrambled eggs and soup. As they heard our food consists of water, bread, apples and bananas their looks showed disbelief and pityness.
When I gave our two friendly meal donators some Haribo saying it’s pork-free, they smiled mischievous telling me they are of course not moslems!
Before we rushed to the summit, we put on an additional layer of clothes. Soon I wore three trousers, one T-shirt, a long-sleeve shirt, a fleece jacket, a windproof jacket with hat and gumshield plus a scarf and two pairs of gloves. So we were ready. At the summit it was -13°C (8°F) and at the 3rd station already -4°C (25°F).
We assaulted upward, overtaking everyone, defying snow drifts and strong winds. Sometimes we had to open the jackets and put off the gloves since the sun and our motion.
It was only up, up and up. Always up along steep slopes and on narrowest ridges – ok maybe not that dangerous, but it wasn’t easy either.
Fortunately the thin air didn’t affect me much and after 6.5h we reached the last station of the cabin (3700m/12140ft) at 12.30. There is also the Tochal ski resort, but the slopes aren’t very steep.
The last part (1.7km) to the summit was the last challenge. Who would have thought so, it went up again and I started to feel the altitude. It was exhausting and I only did small steps and Roman had some problems as well.
But then we did it! After seven hours we were at 13000ft (nearly 4000m). It was unbelievably great. And the view was so clear. We could see Damavand (5604m/18385ft), the highest mountain in the whole Middle East. It will be climbed as well. After some pictures we went into a small metal igloo to limber up and eat. All the other people with their clothes let us look like bloody amateurs, but as everyone know Austrians and Germans are tough guys.
However we were invited for tea again and many photos were taken. After we changed our socks for dry ones, we started descending. Due to the snow and mud created by the sun it wasn’t easier as the ascent. We weren’t faster and didn’t make any break. For the last part Roman took the cabin, but I just couldn’t. I had to finish it the old-fashioned way. After 13 hours, approx. 32km walking distance and at least 5200m (17000ft) of difference of altitude I arrived at 7pm at the dorm.
It has been the longest hiking tour, I have ever made in one day. It was great but we were unfortunate that we couldn’t celebrate with a cold beer. Though our lungs were able to be cleaned after two weeks breathing polluted air and the silence was very nice as well. Of course I got a sunburn.
Before going totally exhausted to bed, we watched Tatort.

The first cabin goes up

View around – on the top

Damavand (in the middle)

Some fitness after a short walk