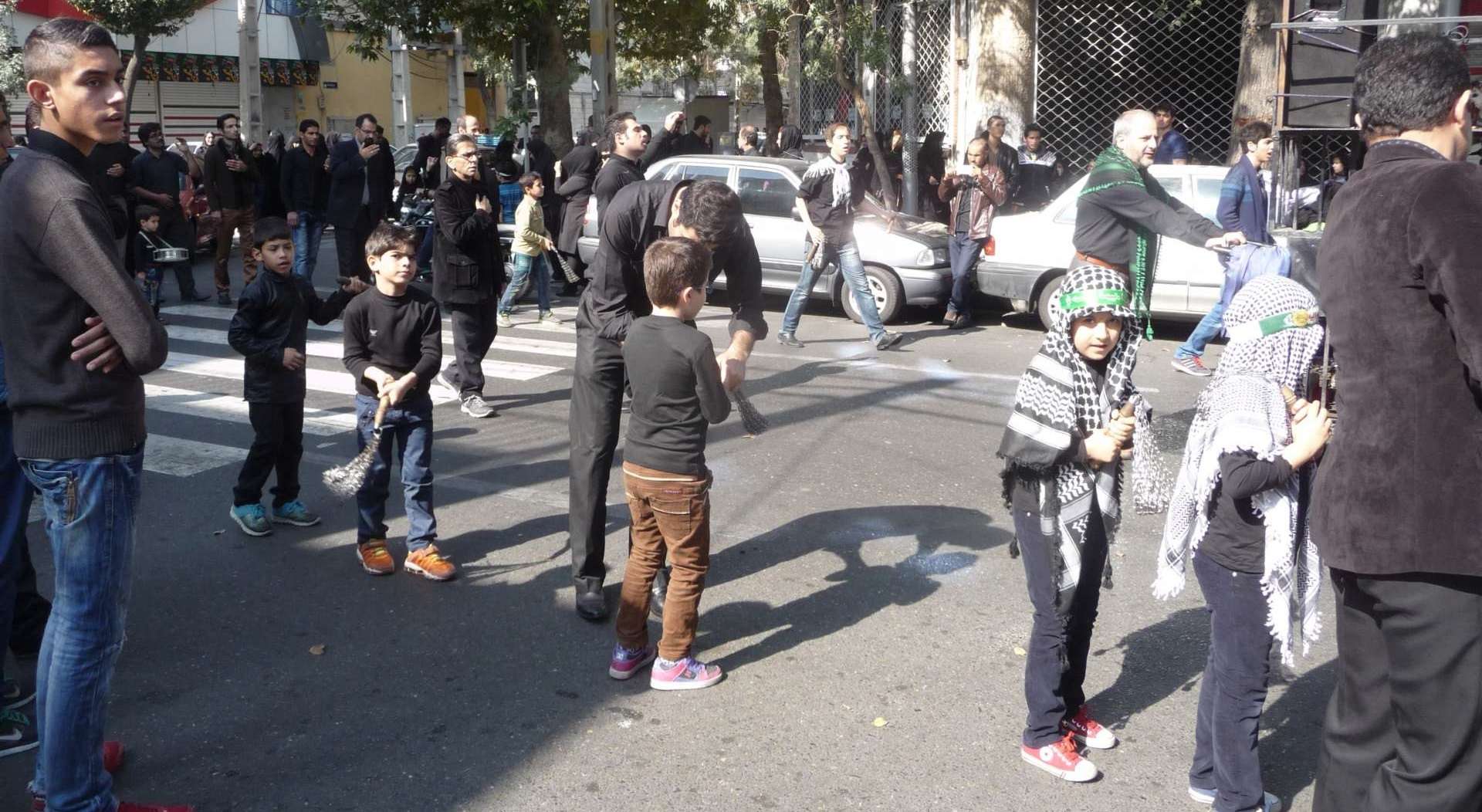 So on Saturday morning I went with my parents to the bus terminal and hoped that I could get a ticket for the same bus, too. There was a free seat left and so 6h ride to Esfahan could start.
Having arrived we went to Imam square and went to Jolfa quarter to eat.
After we walked back to the hotel along the drive river bank and famous Si-o-se Pol (33 columns bridge).
Sunday we had breakfast like kings and until the afternoon my parents visited a lot of sights whereas I sat outside and read. I knew most of the places already and the travel guide can explain more about the history than I. Once I was sitting around, I could finally use my knowledge of Farsi to react to a stupid comment (“Hahaha, look! That guy is still sitting there”) and caused an awkward silence, which was a great feeling.
During sundown I took my parents to Ateshkadeh (a fire temple) lying on a hill at the edge of Esfahan where we had a nice view of the town that was greeting night-time. Initially I wanted to go back to Tehran that night by train, it just goes every two days and of course not on a Sunday evening. Hence I had to go by bus again.
Tuesday (13.10) M. and I went to Semnan to visit E. and A. for a few days. In addition we ate at a super delicious, traditional and original small kebab restaurant in a mountain village. In addition we went to Sharud and hitch-hiked from there to Bastam where we visited the Bayazid Historical complex, dedicated to Bayazid Bistami, a Persian mystic of the 9th century, and the old Fridaz mosque. Also we hitch-hiked further to the village Ghale-Nokharaghan. It lies at the foot of a more or less well-known cloud forest with the same name (Cloud Forest). Unfortunately we were too late to even go inside a little bit, because it started to get dark which was why we returned.
On Thursday (15.10) we just hang around Semnan and helped A. organizing things for her move to Munich. In the afternoon I went playing tennis with E., which I never did before and on Friday the holidays were unfortunately over and M. and I went back to Tehran.

Ice house out of Bastam

Inside the ice house

A new course (the last one for me until now) started and our teacher seems to be a really religious woman, of whom we can only see the shape of her face and hands which are uncovered.
The second and third day I didn’t attend classes because I spent my time with my parents in Tehran who had finished her tour. As I noticed on Tuesday, I didn’t miss anything important.
In general I considered for quite a time to continue studying at Dehkhoda. Since the result of my last exam was the second best although it was not how I would have rated myself. Furthermore I think that I have enough general knowledge to teach Farsi to myself and that better than at the institute. On the other side I’m only allowed to stay in Iran, when I attend the language course, so I didn’t have any other possibility than to continue to December.

Saturday was the national holiday of Ashura. Shia moslems mourn the death of her third Imam Husayn who died as martyr in the battle of Kerbala. The day is celebrated on the 10th day of “Forbidden” month Muharram. The days before are used to celebrate mourning and even after black flags hang all over the city and officially it is kind of forbidden to listen loudly to music, wear make-up, bright clothes, etc. – all that is fun. But like Ramazan, only a few Iranians care. In the streets mourning processions and plays about Husayn’s journey and battle are held.
To see them, I went to the south of Tehran, to Nazi Abad. The quarter’s name has really a connection with the Nazi regime and Third Reich, since they supported a local railway company. Nevertheless there is no Hitler Boulevard of Goebbels Alley. Every hundred meters of so I was able to see a procession and it was really interesting to see all the marches and rituals being shown. Coming with the celebration it is custom to give away so called Nazri. It is free food or tea as symbol of gratefulness for Husayn’s suffer and not only for Moslems (although once a guy asked another one to give me some, but I was refused). When I went back home and waited at the bus stop, one man came towards me with a delicious lamb liver and kidney kebab and even gave me a short ride.

Free food ready to give away